The Crazy Shit that Happens at the Breakfast Buffet

The year was 1989 and I had amassed a small arsenal of songs I had written, recorded, and produced. Now I just needed a way to get at least some of them heard. I already knew if I was going to be successful, I needed to first get out of the little town I was from. Living an hour and a half from New York City allowed me to register for a one-day songwriting and music production conference in Manhattan.

I was both exhilarated and anxiety-stricken as I took my first few steps into one of the large ballrooms at the New York Hilton. I knew I would be mingling today with several seasoned, prolific people within the music industry. I had arrived early and was one of the first one hundred attendees of the 1,200 registered, so good seating was definitely not going to be a problem for the first of several seminars, meet and greets, and, of course, the keynote speech. So I made my way in, with my duffle bag that contained several three-song packages I was hoping to deliver to some of those influential people.

Then, there it was. The most amazing breakfast buffet table I had ever seen. I just had to get something. While deciding what to get, a pleasant older woman made her way to the table as well and began talking to me.

“Hi. How are you this morning?” she began.
“I ma’am. Good. My name is Eddie Washington.”
“Well Eddie Washington, my name is Ann Ruckert. It’s very nice to meet you.”
“Nice to meet you too, Ms. Ruckert.”
“Oh no, you don’t. You can call me Ann.”
“Oh. Okay Ms. – I mean, Ann.” I stuttered as she smiled.
“What are you looking to get out of today’s conference?”
“I’m a songwriter and musician, and really want an opportunity to get my music heard.”
“Do you live here in Manhattan?”
“No. I live in the Catskill Mountains.”
“Oh! The Catskills! Beautiful up there. Been there many times. Lots of room to move around and be free up there. A lot of famous people got their start-up there, you know.”
“Yes. We certainly have a lot of history up there.”

“Honey. Do you know what I like about you? You don’t come across needy or cocky. You’ve not asked me to do anything for you. And I find that to be the trait of a humble person.
So here’s what I’d like you to do. Give me one of your packets and let me give it a listen to and either way, I will call you back with my thoughts.  Would you like that?”

“Yes. That would be great.” I reluctantly replied as I handed this person one of my few packets. She then handed me her card.

Just then, someone came for her and informed her she was ten minutes out from her keynote address to the group. I was beginning to realize I had just been speaking to someone very important.
“Duty calls. It was a pleasure meeting you today, Eddie Washington.”
“And you too, Ms.–I mean, Ann.”
A few minutes later, while I was seated in the front row, the guy next to me asked, “How in the world did you convince Ann Ruckert to take your packet?”
“She actually asked me for it,” I said, nonchalantly. “No shit? Well, my friend, you’re probably one of the most fortunate people in this room right now! Wow! You are so lucky.”

I played along instead of letting on that I had absolutely no idea who she was. But I was about to find out as we all seated ourselves for the keynote address. An executive from the Songwriters Guild of America came out to introduce the keynote speaker.

“She’s produced, played, and sung on over 3,000 commercially released recordings. She’s worked with the best in the business from Barbra Streisand, Roberta Flack, and Aretha Franklin to Quincy Jones, Merry Clayton, and Suzanne Vega and too many others to list in this short introduction. She currently serves as Vice President on the Grammy’s Board of Governors, The Songwriter’s Guild of America, The co-founder of The Jazz Foundation of America, among others; and is certainly one of the most beloved individuals in the business who certainly needs no introduction. I present to you, Ms. Ann Ruckert!”
Everyone exploded into uproarious applause. Apparently, I had been the only one in the dark as to who she was. I was in complete shock.

“Oh my God! No one is going to believe who I just met and gave my music to!” I whispered to myself.
I ended up meeting quite a few interesting and famous people that day, some of whom I would meet again in the business. But none of that mattered because I stumbled upon the holy grail of the entire songwriting convention, simply by trying to get a coffee and a bagel.

It was just about a week later, I was at work when my office phone rang.
“Eddie? It’s mom.”
“Hi, mom.”
“Your dad and I think you might want to hear this.”
She placed the phone up to the answering machine. Yeah. You heard me correctly–answering machine. Don’t be a hater.
“Hi. This message is for Eddie Washington. This is Ann Ruckert. I listened to your tracks and I would like you to give me a call back so we can discuss some possibilities for you. Here is my number again, just in case. I look forward to talking to you soon.”

I was so excited, I don’t even think I hung up the phone before running out of my office and letting my boss know I had to leave for the day. I drove straight to my parent’s house; incidentally, where I still lived and listened to the voice recording again.

I took a deep breath and called her office right away. “Hi. This is Eddie Washington. Ann told me to call her back.” I mentioned.
“Please hold for a few minutes. She will be with you shortly.” I was placed on hold. I was jittery from my sudden rush of adrenaline.

“Hi, Eddie. Thank you for calling back so quickly. Listen, hun. I gave your songs a listen to and I really like track number two. I think you have something special there. The other tracks were not bad, but I really like Save It for the Children. That’s a special song. When do you think you can have your group ready to do a showcase downtown; and by downtown, I mean Manhattan babe, not the Catskills.” she laughed.

Link to the Song, Save It For the Children on YouTube
https://youtu.be/KRSkpvZGMR4

I didn’t know how to respond to what she had just offered me? I mean, she just offered me the break of a lifetime and I had absolutely no way of fulfilling her request.
“I am a songwriter. I write songs and lyrics. I go to a local studio and record all of the instruments myself with the help of a great vocalist named Ken. But I have no group.”
“I see. Oh, dear. What to do?” she paused for what seemed an eternity before continuing. “I am Artist and Repertoire, A&R. So I am unfortunately not going to be much help to you. However, do you know what six degrees of separation is?”
“Well, as you shop those songs and that one, in particular, feel free to drop my name. Hun, something’s going to click for you. You have a wonderful talent. Best of luck with your career.”

Over the next few years, I would run into Ann now and again. Amazingly, she always remembered me in the blink of an eye and would give me a huge hug where ever we were, which was usually downtown Manhattan. She saw some of my successes and seemed delighted with my progress, although, to me, they seemed pale in comparison. 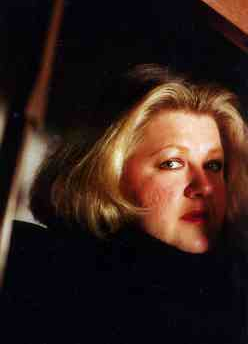 I was always proud to call her my first break, but a friendly welcoming voice that took a genuine interest in me, that began in front of a breakfast buffet table so many years ago.
Sadly, Ann died in 2015. Rest peacefully, my friend.